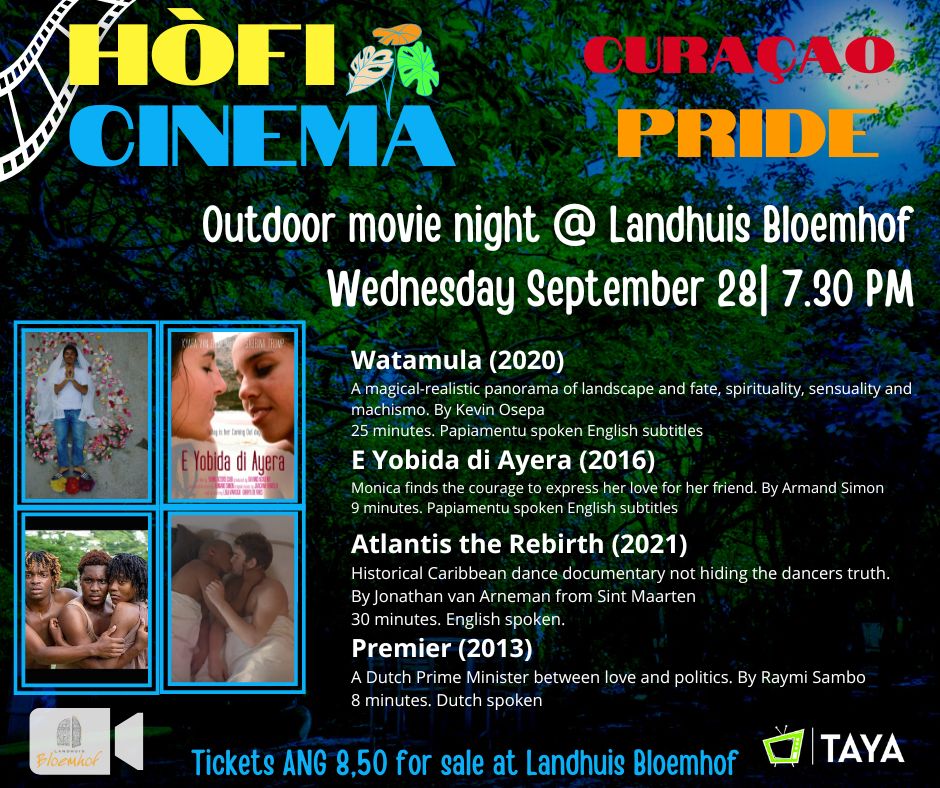 Watamula
Watamula is a place where Curaçao breathes. It is also the destination of René, who emerges from a river and staggeringly continues his journey across the island. He comes across sharp thorns and sweet rose petals, meets with rejection and comfort, clutching the amulet he was given at birth. Visual artist and filmmaker Kevin Osepa, for whom the identity of young Afro-Caribbeans is an important subject, moulds this trip into a magical-realistic panorama bringing together landscape and fate, spirituality, sensuality and machismo.

E Yobida di Ayera (2016)
Monica is in love with her friend. Today they are meeting at the beach, just the two of them. Monica has finally found enough courage; this seems the perfect time to tell her. Is this the day she comes out of the closet?

Premier
The 8-minute drama tells the story about the first black prime minister of the Netherlands (played by actor Raymi Sambo), who is not allowed by his party to be open about his homosexuality.

Atlantis: the Rebirth
Atlantis Rebirth is a dance film documentary exploring where we have been as Caribbean people and where we would like to go. It includes both factual historical accounts as well as imagined future possibilities. It was directed and choreographed by Jonathan van Arneman and it features dancers from the National Institute of Arts in St Martin. Van Arneman:'when I choreograph for LGBT dancers, I let themin their reality.'

The Passion of the Composer

Piano concert The Passion of the Composer performed by Alexander Kraft van Ermel.

Personalities is Annemieke Dicke her first solo exhibition at Landhuis Bloemhof and features a collection of paintings, oil as well as acrylic accompanied by ceramic objects.

Annemieke Dicke is an established artist with an impressive art career. She is mostly known for her ceramic work. She developed her own style and technique through attending a large variety of courses and classes she followed in The Netherlands, Curaçao, Italy and The United States. Annemieke participated in various exhibitions in Curaçao as well as abroad. Her works are part of many private art collections including the Dutch Royal House.

Personalities
During the second lockdown, Annemieke decided to start painting again. Something she hadn’t done in a long time. During this period, she focused on painting portraits of people while putting emphasis on studying and refining her technique. This challenge she put for herself slowly evolved to the exhibition on display at Landhuis Bloemhof.

Personalities consists of portrait paintings using oil or acrylic paint. One of these portraits is titled ‘Shine’ and is inspired by a theater student that Annemieke met at Pietermaai Art Spaces (PAS), where she teaches art and ceramics classes to youngsters and adults five times a week. 'Shine’ is a wall-covering expression of the model's many colors and energy, it portrays a figure with male characteristics based on elements of Frida Khalo. For Annemieke it is important to get to know the individual better during the portrait painting process. And this student was no exception. “I need that personal connection to paint a portrait”, adds Annemieke.

Resilience
The last few years were tumultuous for the artist. In a short period of time her long-term relationship ended, her father died and she had to give up her house and her precious studio, Artis Magistra 22 where she used to work and teach. In the harsh years that followed she was left without a space to call her home or her studio. Two years ago her luck changed and she now has her own home/studio and the space to create. Annemieke is home again.

‘Personalities’ is Annemieke’s first solo exhibition at Landhuis Bloemhof after this transformation. ‘Personalities’ will be showing till October 8th. 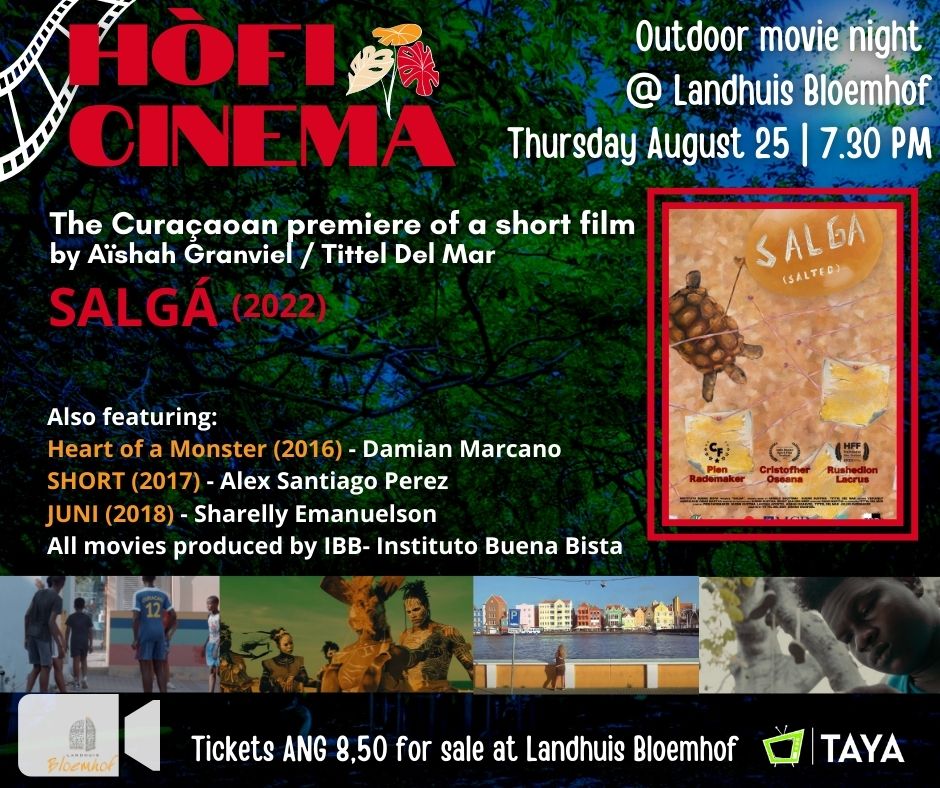 The Curaçaoan premiere of Salgá
An average day in Otrobanda changed drastically after a bang. Can a local journalist find out what happened?

Are you ready for SALGÁ?!
You’ve heard the commotion. You’ve seen the posts, the casting calls and the extensive outreach for support. Months of hard work and we are now finally ready to introduce our newest short film to you: Salgá (Salted)! The first ever short film completely produced, filmed and edited by the IBB. Students, staff and alumni came together to make this project a reality. Under the guidance of creative director Tittel del Mar students came up with their own story, wrote their own script and designed and made everything necessary for the film. Together with Fundashon Rif we casted all the extra actors from Otrobanda and made a film that is 100% Made in Curaçao!

During Hala rosea i sigui different options will be offered in the open air to travel inside to get to our inner feelings and to reflect and find a way to move on. Through meditation, movement, painting, rituals, words and of course silence. Richenel 'Muz' Ansano, Ageeth Termars, Elodie Heloise and Vali Leonora will guide this process. The evening will start together at 7.00 pm and will end together at 10:00 pm. The contribution for participation is 7.50 per person (tea, coffee and water and materials are included). You can register via info@bloemhof.cw 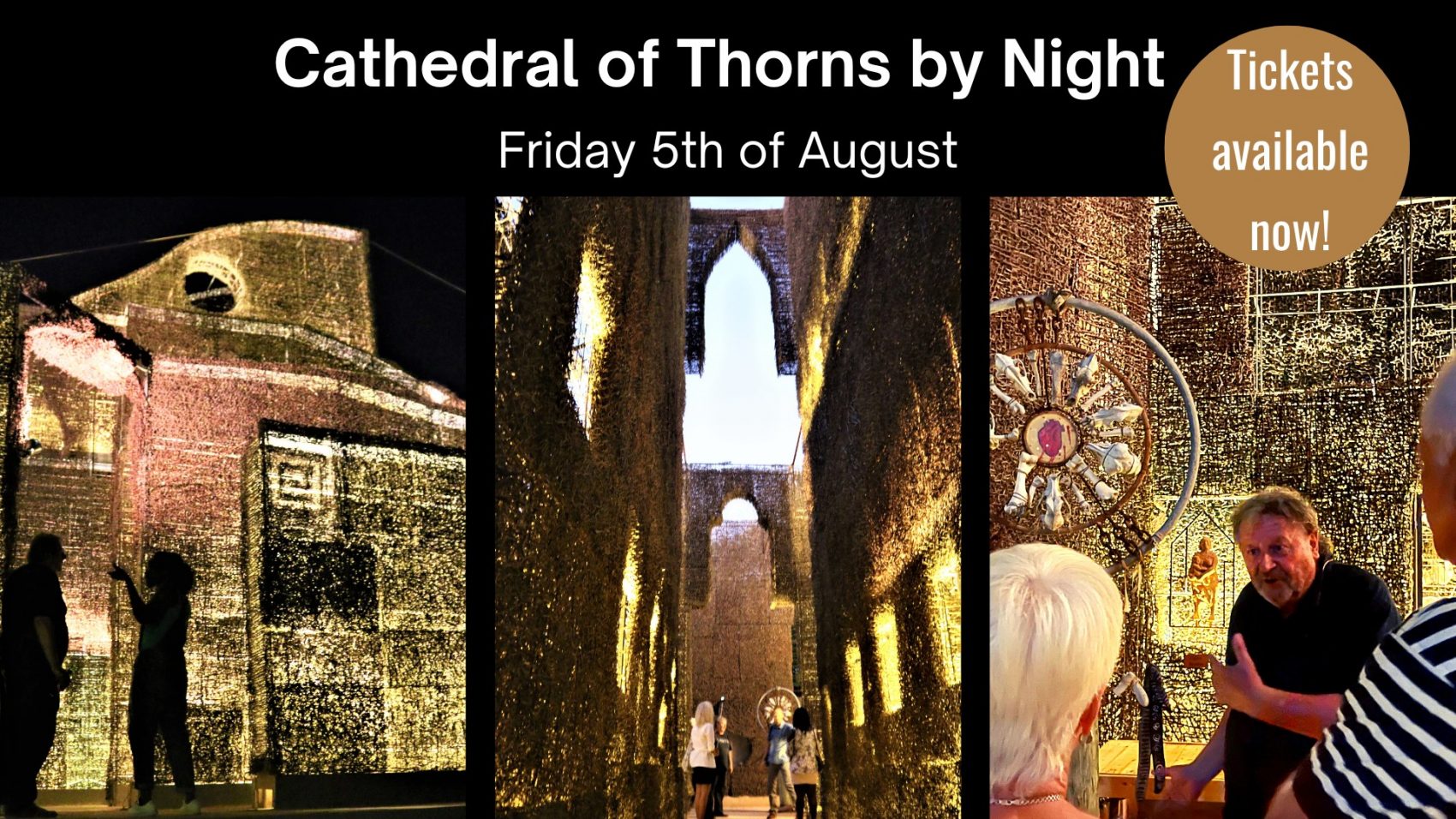 A Musical Paradise
The Cathedral of Thorns will be transformed into a true music paradise. The combined rhythms are a delight for the ear and the hips!
Enjoy Cuban Son and Bolero, the Chachacha, Venezuelan Joropo and Curaçao Waltz with a touch of Latin Jazz.
With Enrico Henriquez on piano; Rhazul Sebelon on kuarta; Ernie Gregorius on percussion; Clifton Daal on saxophone and Yumarya Grijt vocals.
𝐂𝐚𝐭𝐡𝐞𝐝𝐫𝐚𝐥 𝐨𝐟 𝐓𝐡𝐨𝐫𝐧𝐬 𝐛𝐲 𝐍𝐢𝐠𝐡𝐭
Get lost in a fully illuminated Cathedral of Thorns. Be carried away by an evening of magic, wonder and arts. A unique experience that can only be experienced once a month. Join the exclusive guided tour with the designer and founder of the cathedral Herman van Bergen!

In the past few years, we have experienced a lot of new things happening worldwide. Things we took for granted in our way of life were challenged in many ways. These changes, or shifts, sometimes released long established taboos from being taboo and introduced new taboos where there were none before.

The Covid pandemic alone put many of us at a distance from each other through new personal, moral, hygiene and privacy values in dealing with the (side)effects of this worldwide virus. We have seen the rise of an unprecedented cancellation culture, the introduction of #me too for abuse, the start of the Black Lives Matter movement, massive migrations all over the world, the growing use and abuse of social media platforms, the loss of power in the traditional mainstream media, the polarization in societies and politics and so on. All this happened in just a few years. Who can say what triggered what? Fact is, it’s all happening right now. A lot has changed and probably the end is not nearly in sight.

Past TABOO exhibition history
In 2012 we organized the very first TABOO exhibition, Duncan Campbell, then manager at Landhuis Bloemhof, came up with this out of the box idea that led to an exciting and challenging group exhibition.

For TABOO II, which followed in 2015 Duncan felt the time was right to 'do it again', and he curated the second edition. He asked the artists to look at taboos close to home and see if they could put them in a positive light. His approach was ‘What can a taboo do for you?’ Taboos can paralyze people, but they can also be an excellent vehicle for change, voluntarily or otherwise.

That was 2012 and 2015. Just sit still a minute and think about it, where we are now compared to then? For TABOO III, curated by Rainy Marchena, we invited the artists to share and show what they see as the new taboos anno 2022.

TABOO III events
During the exhibition, Landhuis Bloemhof will organize several events and other activities. We will keep you posted.

You can visit this special tribute to our Tafelberg from Tuesday to Saturday between 9 am and 2 pm. Don't miss the opportunity to admire the Tafelberg depicted from all angles in over 50 different works of art collected and/or painted by Tafelberg Fanatics on Curaçao and abroad. As we ran out of wall space we created a photo slide show with many, many pictures of the Tafelberg and its magnificent surroundings.

For those of you who appreciate a close(r) encounter with the Tafelberg we have good news:
You can sign up for:
- Plein air painting sessions with artist Tanja Hummel,
- A lecture on the connection between the Tafelberg and the Mijnmaatschappij by Piet van Heijningen
- A tour of the Mijnmaatschappij in Newport by bus
- Hiking/climbing trips to be booked directly with Rock Climbing Curaçao
- An online photo challenge
Check out the schedule below, find what you like and sign up via info@bloemhof.cw. 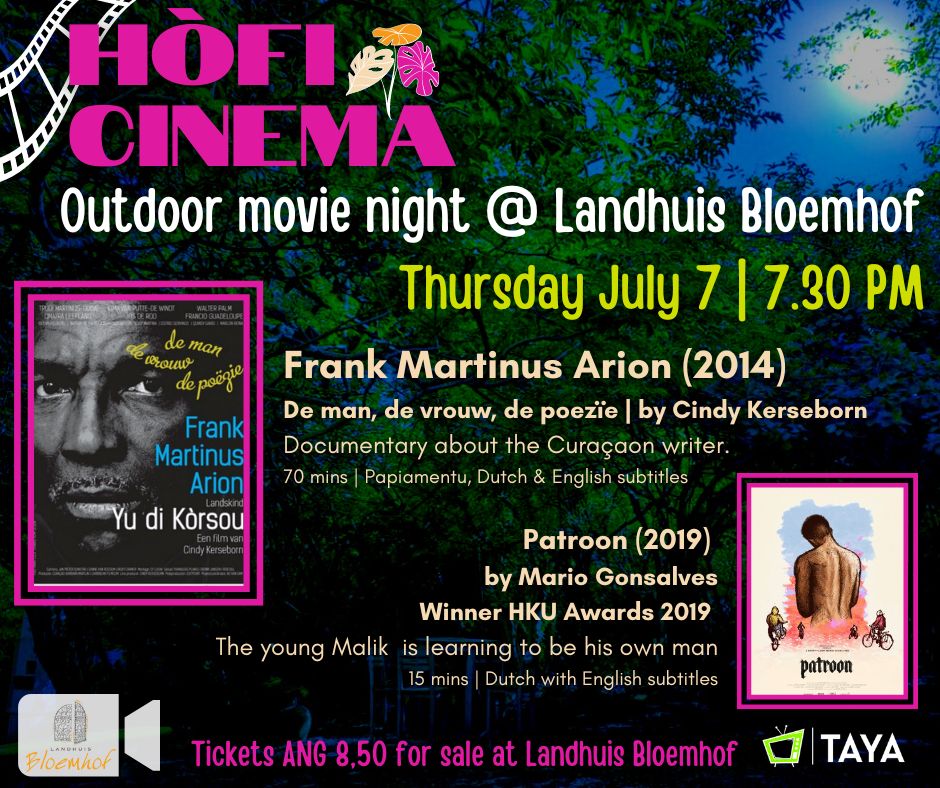 Frank Martinaus Arion:
Arion's most read novel Dubbelspel is about a frantic dominoes match and a picture gradually emerges of the relationship between men and women in that island society. In the documentary, the Antillean machismo is the theme of a fierce and revealing discussion between seven Antillean men from diverse backgrounds. Contrary to that Arion in the film talks about the 'brave women' of the island, who also made the difference in his life and in his work.

Arion was above all a poet. Several examples of this can be heard and read in the documentary. Many of his poems are in Papiamentu. as a champion of this Antillean language, Arion founded a school on the island in which the children are taught in this language.

Frank Martinus Arion was born in Curaçao in 1936. He studied Dutch at the University of Leiden and Amsterdam. He obtained his doctorate in 1996 with The Kiss of a Slave, a dissertation on the relationship of Papiamentu with Western African languages and became professor at the University of Netherlands Antilles in 2009. In his novels and his poems, he gives a lively and loving image of Antillean society, but also provides criticism. Also the Netherlands, the former motherland, is not spared. In 2008 he returned his Royal decoration in protest against the 'Recolonization by the Netherlands'.

Patron
Malik and his mother Zoraya, immigrants from Curaçao who have moved to the Netherlands in search of a better life, live in a close-quarters social housing apartment and often butt heads. Malik sees Zoraya as only caring about herself, while Zoraya maintains Malik does not respect her. Their unwillingness to communicate or compromise pushes the two apart. Malik falls in with a group of neighbourhood boys, who explore abandoned buildings and bond over an oppressive societal system designed to hold them back. One night during a game of soccer, however, Malik provokes one of the other boys and ends up in a fight. Ostracised, Malik decides to move on from the neighbourhood. He meets a girl Aria and falls in love, able to express his feels and deeply connect with another person for the first time. Soon, though, Aria learns she’s expecting a child. Malik, blindsided and unsure of what to do, decides to return home to Zoraya for advice. Zoraya refuses to sympathise with Malik, explaining to him the cold hard reality of life, and leaving him on his own. Malik realises that no matter his circumstances, he is the only one that has control over his future. Malik steps up, confronting his problems with himself and the neighbourhood boys. Malik returns to Aria and transitions into his new life as a father, vowing to be a positive role model for his newborn child.